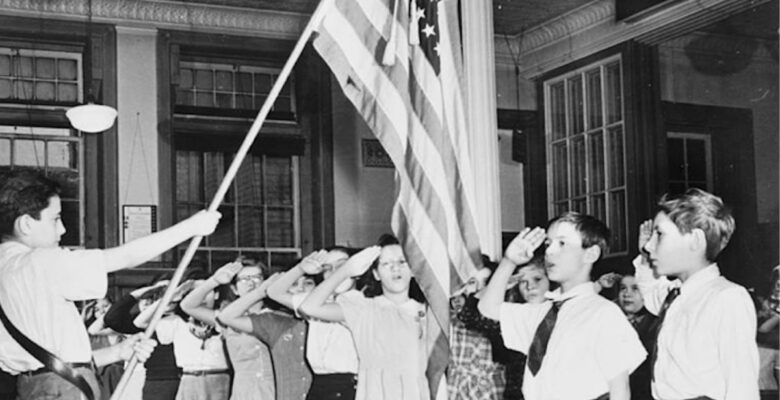 When I was very young, far too young to understand why, I was required every school day to stand at attention and recite the pledge of allegiance. Talking to a piece of cloth hanging from a wall made no sense to me. But I was obedient and that was the whole point. Wasn’t it? Obedience.

Post-WWII & The Pledge of Allegiance

It was the decade after the Second World War and most of the nation remained in obedient lockstep. Preparedness for the next great threat, response in unison. We must all march together as one and “rally ‘round the flag”. That was the best that mid-twentieth century America could muster, obedient patriotism in unison.

I understood the need for regimentation of the masses. You know, “the Russians have the A Bomb” and all. So, I suppose I eventually acquired as much patriotism as the next guy, for a while.

Then we got the Vietnam war, then Nixon, then war after war for profit. As the years wore on, our nation of common purpose and its flag lost their sparkle. No longer a nation of “We the People”, we slowly morphed from the United States of America into the United Corporations of America. Now we strive to survive. “We the People” are long forgotten in a transcontinental rush for profit. The flag became synonymous with imperialist aggression and world dominance. The same flag proudly flown outside CIA headquarters, the Pentagon, and the Bank of America.

Embrace A New Pledge of Allegiance

While the pledge remained a ubiquitous ritual at public events, I was no longer comfortable being an ally of a piece of cloth. Knowing that our nation is not supposed to be about a flag, or perpetual war-for-profit, but about “We the People”, I rewrote the pledge and now speak it proudly. While others drone on in oblivious obedient lockstep, I recite the following and they’ll never know the difference.

I pledge allegiance to the people
of the United States of America.
And to the Constitution which they defend.
One nation, eventually,
with liberty and justice for all.

Discover More About The People’s Party of Washington

Find out about who we are, what we stand for, as well as our newsletter, volunteer opportuniites, and more